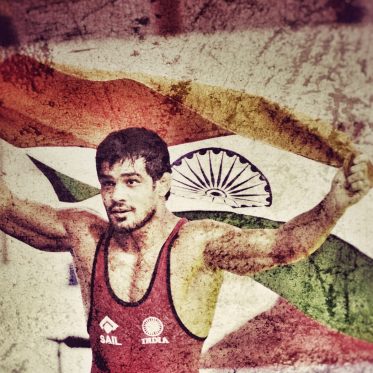 The fall of Sushil Kumar and Indian wrestling

Sagar Dhankhar's death, following a beating allegedly at the hands of his mentor, exposes the seedy underbelly of the sport, one where greed, egos and megalomania are intertwined with crime.

The bout has a racy start. No sooner does the referee blow his whistle, knuckles lock and the two bodies collide, like two giant logs, with a thud. The wrestlers move fast. Their muscles bulge and glisten with sweat as they coil and uncoil, twist and turn, trying to gain an early advantage. A quick attempt is made by the wrestler in blue, Kaiyue Cheng from China, for a headlock, but the wrestler in red, Sagar Dhankhar, recoils his torso to escape the hold. Knuckles lock again. Kaiyue’s left leg is open and, for a split second, Sagar contemplates a move. If it were a dangal—the Indian version of mud-wrestling which dates back millennia and is hugely popular, especially in north India—in India, he would have grabbed his opponent’s ankle and tossed him. But here, on the mat at the Junior

Home >
Chaos >
The fall of Sushil Kumar and Indian wrestling