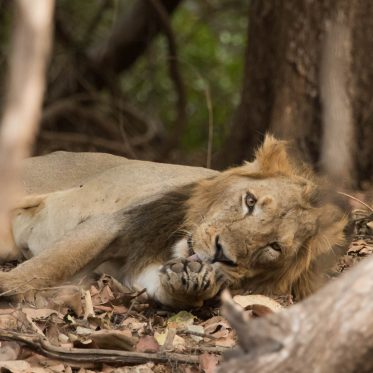 All’s not well with the Asiatic lion

Their numbers are at an all-time high, but the lions of Gir are plagued by habitat degradation, epidemics, questionable vaccinations and radio collaring, and a forest department that shuns transparency.

A pride of ten lions makes its way through the terrain, the females, sub-adults, and cubs tailed by a lone adult male as rivulets gush to their left. The camera filming them from behind zooms in as their relaxed gaits cut through a flooded landscape. Two lions—whether sub-adult or female we can’t tell, because the video is grainy—indulge in play. The male saunters as only a beast of regal bearing can.

It’s a reassuring scene in the wake of Cyclone Tauktae, which recently lashed western India and made landfall in the district of Gir-Somnath in Gujarat—the nucleus of the world’s only population of the Asiatic lion. Which is why Rajiv Kumar Gupta, a bureaucrat with the Gujarat Forest & Environment Department, shared the clip on Twitter. “Lions are completely safe in Gir landscape… a rare video of a pride in Akolvadi range Gir West crossing a water way safely,” he tweeted on 20 May. People, including India’s environment minister Prakash

Home >
Chaos >
All’s not well with the Asiatic lion